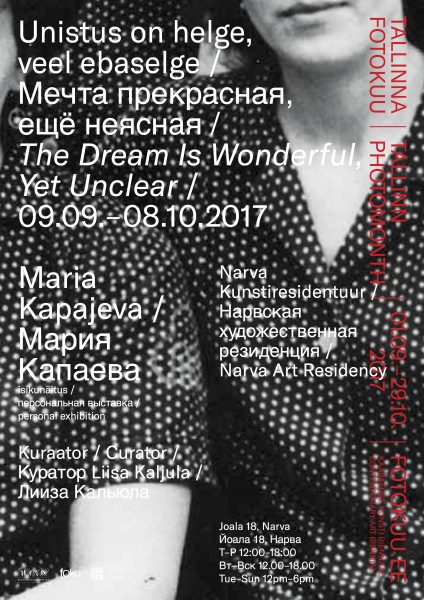 THE DREAM IS WONDERFUL, YET UNCLEAR

As part of the Tallinn Photomonth programme, London-based Estonian artist Maria Kapajeva returned to Narva Art Residency with a solo exhibition studying the social legacy of Krenholm. For 150 years, Krenholm – the textile manufacture that was declared bankrupt in 2010 – was the most important enterprise in Narva, shaping the social and cultural as well as architectural atmosphere of the city. The exhibition focused on the mill in the late socialist period, when its workshops employed a collective of 12,000 mainly female workers.

The inspiration for the exhibition was drawn from interviews conducted with former workers of the mill and from the digitised family albums, diaries, and memorabilia gathered by the artist during these interviews. By placing this material into the context of a multimedia contemporary art exhibition, Kapajeva made the history of the local working class visible and enhances it with all of the artistic means at her disposal. The viewer was presented a mill that was filled with lively female collectives and the deafening rhythm of the looms, but which still seemed like a bright and distant dream in today’s competitive world, where the collective spirit and sense of togetherness between women are challenged by the individualist and competition-based aims of global capitalism.

The exhibition took its name from March of Enthusiasts, the signature song from the soundtrack of the Soviet film The Bright Way (1940). This musical film, which starred the Soviet cinema icon Lyubov Orlova in the role of a female weaver, inspired one of the Krenholm’s weavers to seek employment at the mill after World War II. The opening work of the exhibition, which bears the same name and performs re-enactments of the famous film, compares a woman’s loneliness then and now and presents to the public for the first time the collaboration of Maria Kapajeva and dance artist Maarja Tõnisson in the abandoned interior spaces of the former textile mill.

Maria Kapajeva is a London-based Estonian artist who was born in Narva and has exhibited her work internationally for the last 10 years. As the daughter of a designer at Krenholm, she spent her childhood at the mill, drawing fabric patterns and dreaming about the profession of a textile artist. The exhibition thus took a distinctly personal approach, although the main topics of Kapajeva’s art were also present: the appropriation of found objects and highlighting of peripheral histories, use of textile techniques and focusing on the representation of women, heightened sensitivity towards social and political matters, and specifically East European feminism.

The exhibition was curated by Tallinn-based Liisa Kaljula, whose interests include socialist-era art and post-socialist contemporary art dealing with the recent history of its own region.

The exhibition was accompanied by a diverse trilingual public programme, including Maria Kapajeva’s master class, artist talks, and curator’s tour, as well as an educational programme for the schools of Narva and a lecture by Reverse Resources on contemporary global textile production.

The exhibition is supported by the Cultural Endowment of Estonia, Estonian Academy of Arts, and Narva Gate OÜ. The entire public programme is supported by The British Council in Estonia.