Due to its geographical and political position Narva has experienced several urban transformations. The last and probably the most radical one happened after the WWII. Most of the baroque Narva was hit heavily in the 1944 march-bombings. The government decided to tear down everything that was left in order to make space for new housing. The narrativeless city-planning in the post-war sowjet Narva led to mostly mono-functional housing developments which transformed the whole town into a sleeping city. The type 1-317 houses as common types for post-war housing units are surrounded by nearly neglected green recreational space. The bland monotonous facades are put to stand face-to-face in a vacuous urban landscape. The sowjet city planners failed to implement their goals into a successful urban development. The locals feel themselves alienated from the contextless architecture. After the collapse of the Sowjet Union and the closing down of Kreenholm Manufactory the town lost an important employer. Now Narva needs to face a new problem: the highest rate of unemployment and a rapid decrease of the population. Narva urgently needs a new narrative to revitalize the town and stop its decay. Instead of hanging onto the old picturesque Narva, the more sustainable way would be finding a way to get the inhabitants to identify themselves with the present. 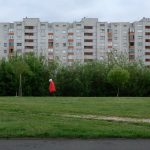 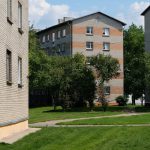 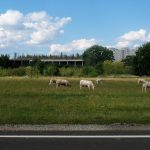